How Does Tennis Scoring Work? 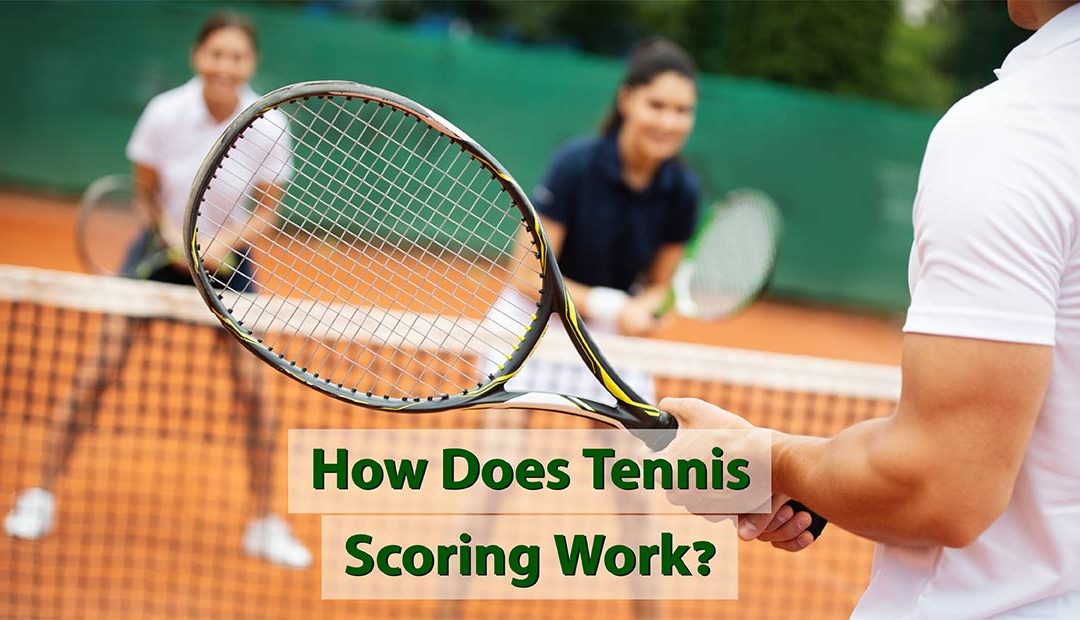 When you first start playing tennis, one of the most perplexing and intimidating features of the game is the scoring system. Points, games, advantage, sets, and tie-breaks are just a few of the words you’ll need to understand. You’ll also have to learn how to count points using a totally confusing method – Love, 15, 30, 40. Finally, you also need to figure out when each player serves and switches sides.

The following information discusses the game of tennis and how match-play is scored.

Tennis is a sport that is played on a rectangular court with a variety of surfaces. It may be played with two players (single match) or four players (four player match) (doubles match). Players stand on opposing sides of the net and strike the ball back and forth with a stringed racquet.

How to Score a Match in Tennis

A game, a set, and a match are the three stages of a tennis match.

A set is a group of games that players play until he or she wins six games (or more).

A best-of-three or best-of-five set match is how competition tennis is played. Championship matches are usually played to five sets.

How ‘Points’ are Scored

After the ball has been struck by an opponent, each player or team has one bounce to return the ball over the net and inside the court’s limits. Players in wheelchair tennis have a maximum of two bounces. The player scores a point if his opponent fails to return the ball within bounds on the proper court.

A player must send the ball over the net and into the opponent’s court. The opponent will attempt to do the same and if both of you succeed, a rally will ensue (a ball going from one side of the court to the other, over and over).

There are five methods for a tennis player to earn points based on that principle:

How ‘Games’ are Scored

If both players reach 40 points, the score is known as “deuce.” After deuce, a player must score two points in a row: the first, known as “advantage,” and the game-winning point. The game will return to deuce if the opposing player scores the following point. 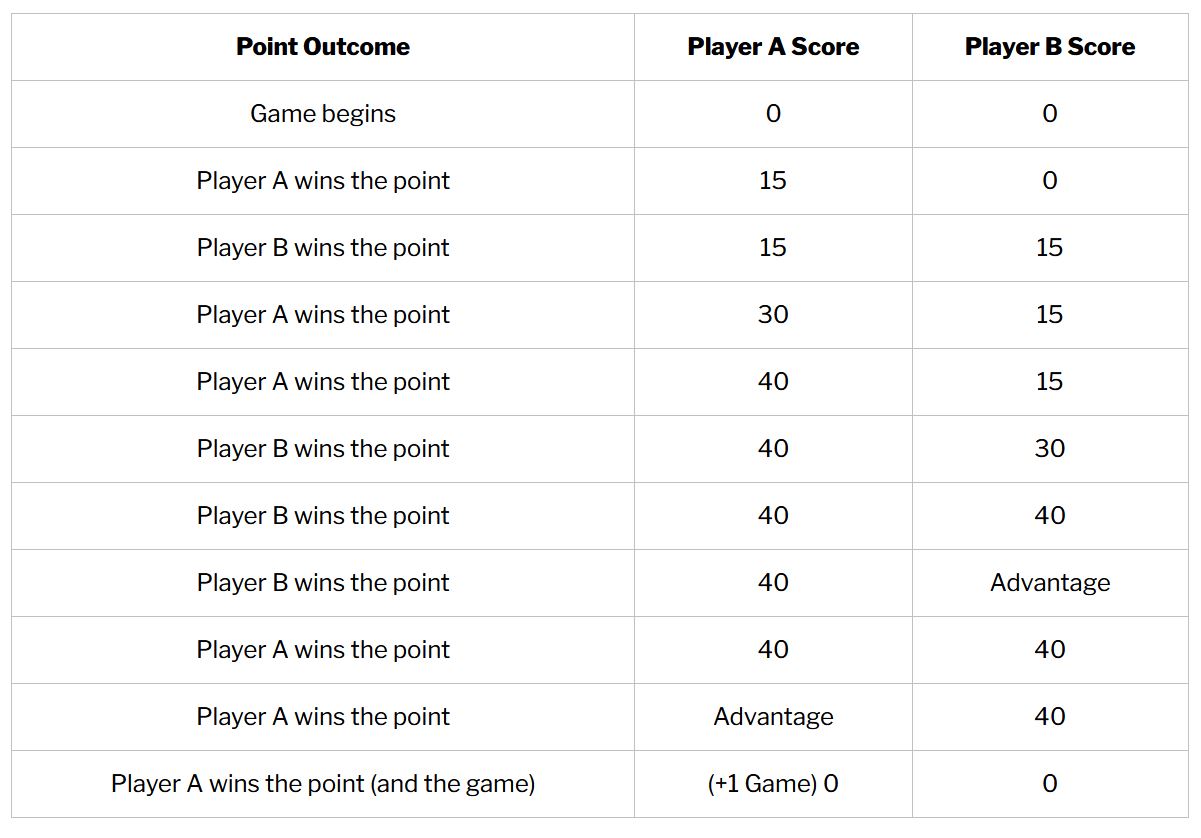 How ‘Sets’ are Scored

For a tiebreak set, the rules are somewhat different. If a set is tied at ‘6-6’, a tiebreaker game is played to decide the set winner, resulting in a ‘7-6’ set score. This is scored one, two, three, and so on, rather than the standard tennis scoring. The tiebreak game and set are won by the first player to win seven points by two. However, various competitions have different point totals. 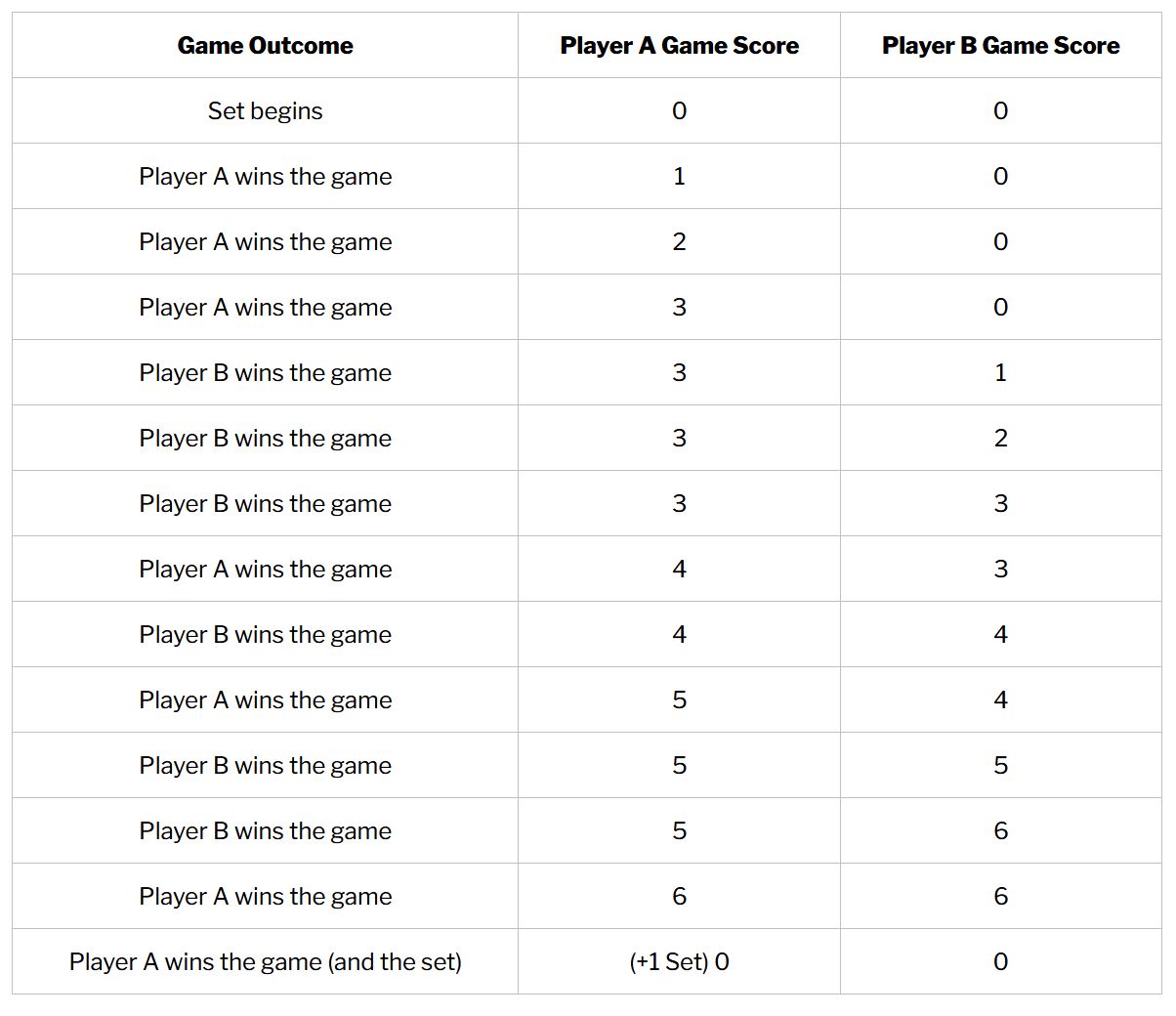 How the ‘Match’ is Scored

Now that we’ve covered how to win tennis points, games, and sets, let’s look at how to win a tennis match. Understanding how to win a match should be simple if you understand how the rest of the scoring system works.

How to Start a Match

After determining who goes first, either by flipping a coin or spinning a racket on the ground, the player gets to choose one of the following three options:

After the toss winner selects one of the aforementioned alternatives, the opponent selects the remaining option.

When Do Players Switch Sides?

On odd-numbered games, players or teams switch court sides. This means they do so after the first game and every two games after that.

Why are Tennis Matches Scored So Peculiarly?

One hypothesis is that a clock face was used as a scoreboard in the early years of the game, in the 16th century, and the hands were moved a quarter of the way around each time, starting at 15, then 30, then 45.

The 45 was changed to 40 to allow for a deuce of 50, with the hand eventually advancing to the top mark when a game was won.

Many scholars, however, have discounted this notion, claiming that the game predates clocks with minute hands, implying that they could not have been included in the Medieval game.

In reality, most tennis historians think that an early French version of the game, Jeu de Paume, is to blame for the unusual scoring.

The court was 45 feet long on each side of the net, and the player began at the rear and worked his way forward after each point.

The first to score advanced 15 feet forward, then 30 feet, and then another 10 feet since he couldn’t be too near to the goal – therefore the 40.

Another common idea about the score is that “love,” which means “zero,” is derived from the French word l’oeuf, which means “egg.”

However, this is also thought to be a myth, with experts claiming that the term originated from playing the game “for love” rather than for points.